Composer, arranger & orchestrator. Defined as "a future promise of our film industry" by the web musicadecineblog.com, Pablo P. Garcia (Madrid, 1987) stands out for its eclecticism and the "sobriety of his music." He currently works writing music both for film and audiovisual as for concert halls. Also, he develops a wide activity as arranger for different formations as "Cromática Pistona", "the Sundayers" ... etc. His formation is the basis of his eclecticism, formed from an early age in drums, piano and percussion in both the conservatory and private schools as the EMC in Madrid. His great artistic interest led him to study composition and "film scoring" privately with Oscar Navarro, internationally renowned composer and Claudio Ianni ,renowned orchestrator and conductor specialized in film music and also to study a bachelor in composition at the "Conservatorio Superior de Música de Aragón". Interested in the merger of arts, he founded in 2013 the interartistic project Entreversos where music and poetry comes together. Since 2015, he is part of Booooo Creative Studio as composer, arranger and musical producer and is partner at Musimagen. 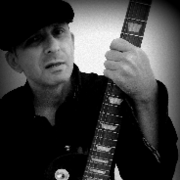